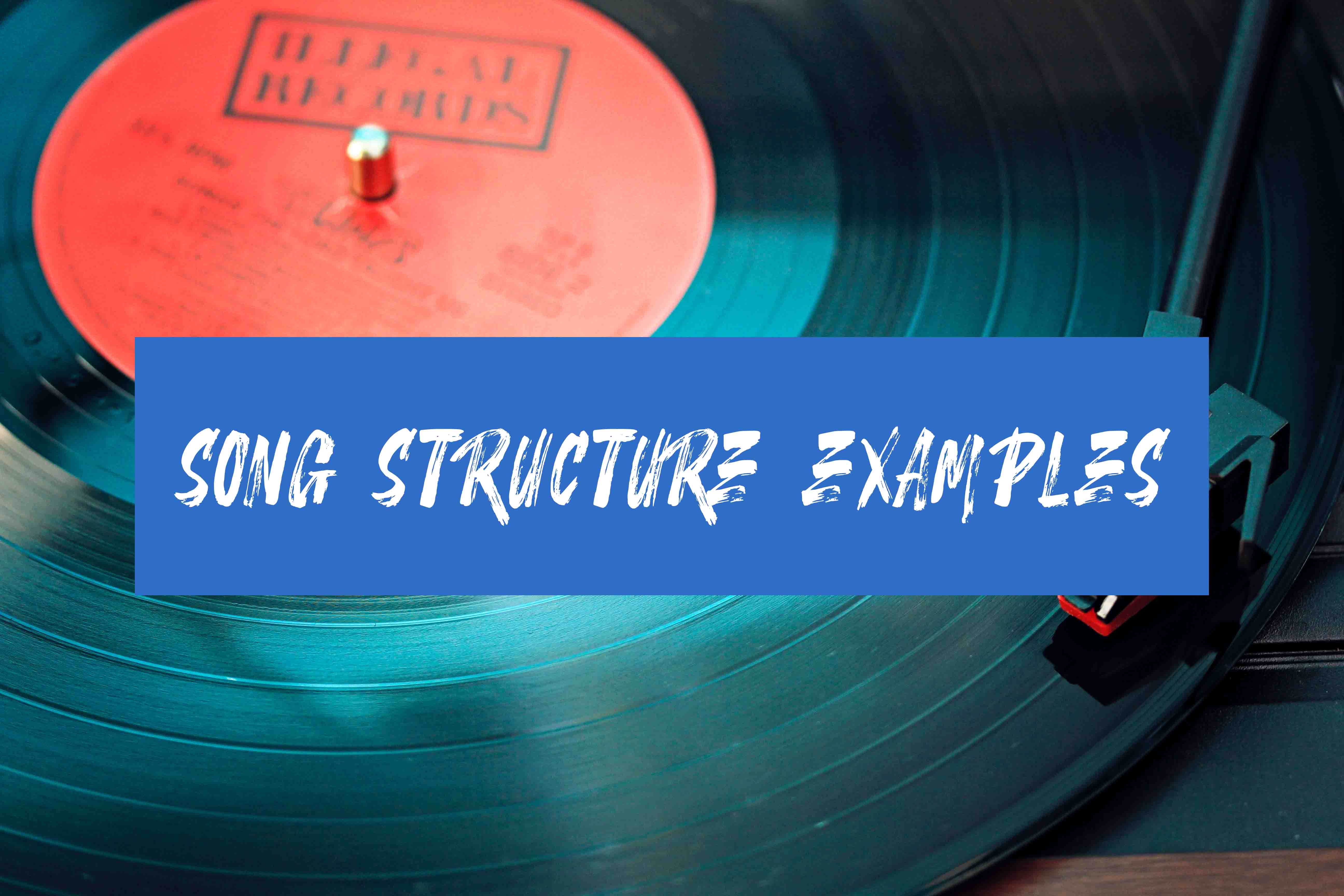 Song structure examples to help you understand the foundation of a great song...


It can be helpful to study some song structure examples to improve your writing. Once you have a handle of what’s common and widely used (for good reason) you can then experiment with the structure of your song if you so wish.

Without structure, its easy to become lost and create a song that ends up all over the place. Which unless deliberate, is not a good thing. We don’t like sloppy songs do we?!

Having a nice little look at song structure examples is a great way to tighten up the core of your songwriting practice.

If you are more inclined to go against the grain, take a quick breather from your cheeky rule-breaking for a moment and study these common examples. After that, you can go back to experimentation. It’s hard to break the mold if you don’t know what the mold is in the first place, right?

Without any further ado here are some common song structure examples that are used worldwide.
(We have not included intros or outro’s in our examples as they can be easily pasted onto either end as you like)

Most common, this structure provides a sort of straight down the "lineness" that is pretty comfortable to digest. Just because it's simple, doesn’t mean groundbreaking songs cant come from this structure. It’s what you do with the music that will set you apart. The structure is just the backbone for your musical creation.

Maroon 5’s “She will be loved” uses this structure. It’s a nicely “weighted” song. Adding and subtracting elements as the track goes on.

Each chorus is satisfying, using the famous vocal hook “she will be loved”. It also makes use of a bridge that lowers the intensity before bringing it all home with one last hard-hitting chorus.

It’s easy listening and an agreeable song that has used this common structure to its absolute fullest.

This is much the same as the above-mentioned structure although it's sprinkled with a tad more complexity to build and release energy.

The addition of pre-choruses can really accentuate the choruses as they hit. It's a nice idea to use pre-choruses if your chord structure is simple.

A pre-chorus can be carried out in several different ways, most notably, through the use of repeated vocals. Almost as if it were a chorus, but placed within the verse chords. As well as varying the instrumentation slightly from the verse.

Remember creating anticipation right before the chorus is the name of the game here.

Lorde’s “Royals” uses this song structure. Its generally an understated song, but she has chosen her structure well. The additions of her pre-choruses serve perfectly as an example of adding energy as a track moves forward.

Simple and straightforward. If a song’s arrangement is interesting enough, sometimes a bridge can feel like an unnecessary tangent.

This structure generally makes use of unique instrumentation throughout as well as rich lyrical content. You gotta keep things fresh here.

Sixto Rodriguez’s “Like Janis” is a prime example of this used well. Incidentally, Rodriguez didn’t seem to be much of a fan of bridges generally.

It is worth noting that his songs were packed with genius lyrics, always keeping the listeners ear keen. Bridges simply didn’t seem to be a necessity in some of his songs. He kept it simple.

Quite obviously one of the most simple structures out there. With no chorus featured, its a hard route to take when trying to write a pop song hit though.

A refrain is generally used at the end of each verse in this structure, gaining familiarity and serving as a kind of hook for the song. A refrain is simply a line or phrase repeated throughout the song. (More often than not the name of the song).

This structure, though simple, needs to be well thought out in terms of melody and instruments. It can become stale pretty quickly, so you need to switch it up through melody lines and interesting instrumentation.

Louis Armstrong’s “What a wonderful world” is a classic example of this structure. It is so uncomplicated and yet probably one of the most recognizable songs all over the world.

Obviously, Armstrong’s voice is what made that whole song, but he kept it short and made use of a nice bridge to keep things fresh.

This is another extremely basic way of structuring a song, but it has proven effective in the past. Again, a refrain is recommended here just to bring the listeners ear home every once in a while.

This kind of structure is great for narrative based songs. A chorus or bridge might interrupt the story here, so it can be an option not include them at all. Sometimes it works very very well.

Bob Dylan’s “Blowin’ in the wind” adopts this structure, although we must admit there are short instrumentals after every refrain sung.

This song is wonderfully simplistic, with no obtrusive instruments or sections written for the sake of it.

This structure works particularly well if you are a folk musician or even a rapper. It can be the most effective way to give your lyrics central stage and get your message across without distraction.

It is also worth mentioning that many songs seem to abandon structure altogether. But best believe none of them were randomly strung together. It took time.

It’s a much better idea to get used to structure, once you have a solid understanding, then throw all caution to the wind and write yourself a “Bohemian Rhapsody”.

But until then start listening to your favourite musicians, use their songs as song structure examples and learn from them.

Go back to our page on Song structure if you need refreshing on what the different sections of a song mean or do.

Remember don't shy away from learning a bit of structure. It will provide a solid foundation for your music, which in turn will allow you to write better songs and take your music to a new level.